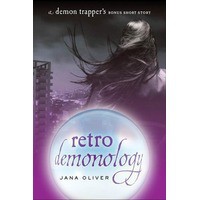 Don't confuse Retro Demonology with a novella, because it's definitely more of a short story (if that makes any sense). It's also available as a free download and is only a handful of pages in length so remember to take that into consideration before deciding to read it. However, if you're reluctant to commit to A Demon Trapper's Daughter, the first full-length book of Jana Oliver's new series, this is a good way to go. This prequel is very cute and will wet your lips just enough to get you interested in the series.

The story takes place before book one and is about Riley's first solo trapper mission. This prequel introduces a neat concept. The world has changed a lot since the demons managed to take up residence on Earth. Some people are having a hard time dealing with their new reality so as a coping mechanism they've created their own mini-oasis in a past decade. In this case, Riley's first customers are stuck in the '60s. The trapping goes off without a hitch but she runs into a bit of a problem on her drive home. I don't want to spoil such a short tale so I'll stop here; but Jana Oliver manages to demonstrate a bit of the sarcastic humour that's prevalent throughout The Demon Trapper's Daughter.

This prequel will only take you about 10 minutes to read but Retro Demonology could have easily been a chapter in book one. It'll give you a pretty good idea of what to expect from the series while not giving away any plot secrets. I enjoyed it for what it is: a quick, easy read. Retro Demonology is perfect for existing fans of the series as well as for possible future ones.
Tweet